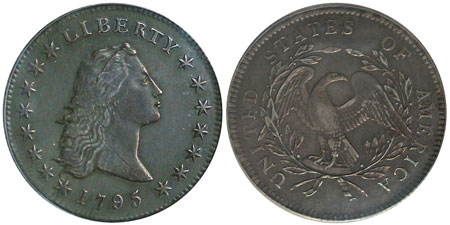 The 1795 Flowing Hair Dollar (Buy on eBay) represented the second year of mintage for America’s first silver dollar series. The mintage increased greatly from the prior year when less than 2,000 pieces were released. The mintage for 1795 came in at 160,295 pieces.

Ten obverse dies and eleven reverse dies were used to strike the coins, creating a total of nineteen different varieties. Of this number, generally two basic varieties are identified by differences in the reverse design. On the first, there are just two leaves inside the wreath under the eagle’s wing, and the overall wreath is somewhat smaller. On the second there are three leaves and a somewhat larger sized wreath. It appears that the two leaves variety is somewhat scarcer than the one with three leaves, but the price difference is usually small.

Despite the higher mintage, the 1795 Flowing Hair Silver Dollar remains an important part of a collection of pre-1804 Silver Dollars. Uncirculated examples of this date are a rarity and command high premiums.